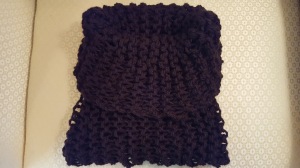 I can’t even begin to express how much I have fallen in love with this cowl. Not just because it was inspired by a great TV show (that’s based on a fantastic book called Outlander), but because it’s so quick and versatile. However, this cowl is no longer in my possession. It was the first of two knitted gifts I sent off for Christmas. This particular cowl went to my stepmother who absolutely loves the Outlander show.

It was my stepmother’s love of Outlander that sent me on a quest to find a pattern inspired by the show. I wanted to make something special for her that she’d enjoy wearing in the cooler weather, especially since she lives in Colorado. I came across several different variations for this particular cowl, but I ended up choosing The Gathering by Kalurah Hudson.

As per usual, I modified the pattern a bit. The original pattern calls for a minimum of 16 to cast on but I did 24 to make it longer. I also skipped the twists because I prefer to have it flat when folded down.  The yarn I used was the same as in the pattern, which is the Wool-Ease Thick & Quick in Barley.

I got to test out my provisional cast on skills again as well as actually doing the kitchener stitch to bind it all together. Hopefully I will be making myself a version of this cowl so I can get more practice with both (but I’ve got to wait until I burn through a lot more yarn since I don’t have any super bulky yarn in the stash)

The really fun part of the whole process was using the giant size 50 needles which are a whopping 25mm. I’m really hoping that I’ll find some other great patterns to use with these needles, aside from another version of this cowl that I’ll make for myself.

This cowl is fantastically stretchy, so it can be easily pulled down over the shoulders without the top flopping around your neck all loosey goosey.